The city of Cesky Krumlov is not just one of the most beautiful Czech cities that attracts people with many extraordinary monuments and beautiful sceneries that change by day and season. Cesky Krumlov is also a spiritual center, a melting pot of many hidden and apparent influences. There is a written and secret history of Cesky Krumlov, and it is sometimes very difficult to separate vision from reality.

Many prominent people went through Cesky Krumlov as a place of initiation. The charismatic preacher Jan Kapstran settled here for a while, the insane bastard of Rudolf II lived at the castle. The great mage and alechmist John Dee wandered with Edward Kelly through the bizarre little streets. Egon Schiele lived and painted ther, Rainer Maria Rilke, Adalbert Stifter and probably also Gustav Meyrink visited the city. The City of the Mystical Rose is full of spiritual traces that need to be found and followed.

Out of the contents 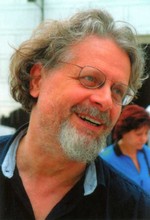